Guitarist Bill Applegate is a well versed, seasoned performer and teacher in many guitar styles including Classical, Jazz, Rock/Blues/Pop, and Country/Bluegrass. Throughout his musical career Bill has performed as a solo guitarist and with a wide variety of professional groups and ensembles. He has had the opportunity to perform at such places as Carnegie Hall and The Grand Ole Opry, and for such people as President Bill Clinton and Prime Minister Tony Blair.

Originally from Omaha Nebraska, Bill attended the University of Nebraska at Omaha, where he received a Bachelor of Music Degree. After teaching music for two years, Bill joined the U.S. Air Force Strategic Air Command Band, at Offutt Air Force Base in Omaha Nebraska in 1984. After five years at Offutt, Bill auditioned for The U.S. Air Force Academy Premier Band in Colorado Springs CO., where he spent the remainder of his 24 year Air Force Band Career.

Bill has had the honor of studying with some outstanding guitar instructors including World Renowned Classical Guitarist Ricardo Iznaola from the Lamont School of Music in Denver CO and Jazz Guitar Great Fred Hamilton from the University of North Texas.

Both in and out of the Air Force Bill has had the opportunity to perform as a solo guitarist and with many outstanding musical groups including, Wild Blue Country, The Falconaires Jazz Band, The Academy Concert Band, Blue Steel(Air Force Rock Band), Galaxy Brass Show Band(of which he was the leader) Changing Times(a popular 4-piece swing group in the Colorado area) Bill has had the good fortune to perform for the Summit of Eight, for the U.S. President and seven other world leaders. With Wild Blue Country Bill performed on the Grand Ole Opry 12 times and also performed in Branson MO. At the Tony Orlando Theater, The Box Car Willie Theater, The Roy Clark Theater and The Mickey Gilley Theater. Bill also had the honor of performing as a Guitar Soloist with the Air Force Academy Concert Band at Carnegie Hall in 2006.

Recently Bill has completed a Master’s degree in Jazz Guitar Performance at the University of North Texas. 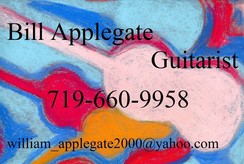